Playing your first disc golf tournament?  You may have already seen a map with codes or heard discussion of OBs, TDs, Drop Zones and Hazards.  Here are a few definitions to help you understand Disc Golf terminology before the big day so you can mix it with the best when it comes to disc golf lingo and just have fun.

Players’ Meeting: A meeting held before play begins.  During this meeting, the TD will discuss any special conditions that may exist on the course and provide information about how the tournament will proceed.  A run-through of the map may be provided so that players are aware of out-of-bounds areas, hazards, islands, mandos, drop-zones, etc.  This is the perfect time to ask the TD for clarification of rules or anything else you are unsure of regarding the event.  If you are not sure what an OB, mando, drop-zone, island or hazard might be, then read on.  All will be explained.

OB:  Out-of-bounds.  During tournament play, areas of the course may be marked as OB, indicating the area in which the disc is not intended to settle. OBs may be marked with line markings, flags or may be physical boundaries such as a fence, or path.  If your disc lands out-of-bounds, your next throw is taken from the spot where your disc crossed the OB line. You are typically given a 1 metre relief which means you can place your marker, 1 metre in from the OB line.  Players should ask others in their playing group for clarification of this point.  Out-of-bounds shots incur a one stroke penalty which means one point will be added to your scorecard.  When asked for your score, you would typically announce the final score (including the penalty) plus let the scorekeeper know you threw OB.  Eg. “OB-5”

Island:  An area considered in-bounds but surrounded by areas that are out-of-bounds.  Islands typically surround the basket.

Hazard:  An out-of-bounds area in which a one stroke penalty is incurred.  If your disc lands in a hazard area, your next throw is taken from where your disc landed.

Mando: (mandatory) An artificial point in which it is mandatory for a disc to fly on the designated side, usually a tree or a pole.  Mandos are usually put in place to make the course more difficult or in some cases, to make it safer.  Missing the mando results in a penalty stroke.  Mandos are usually indicated on your map plus there should be signage on the course. 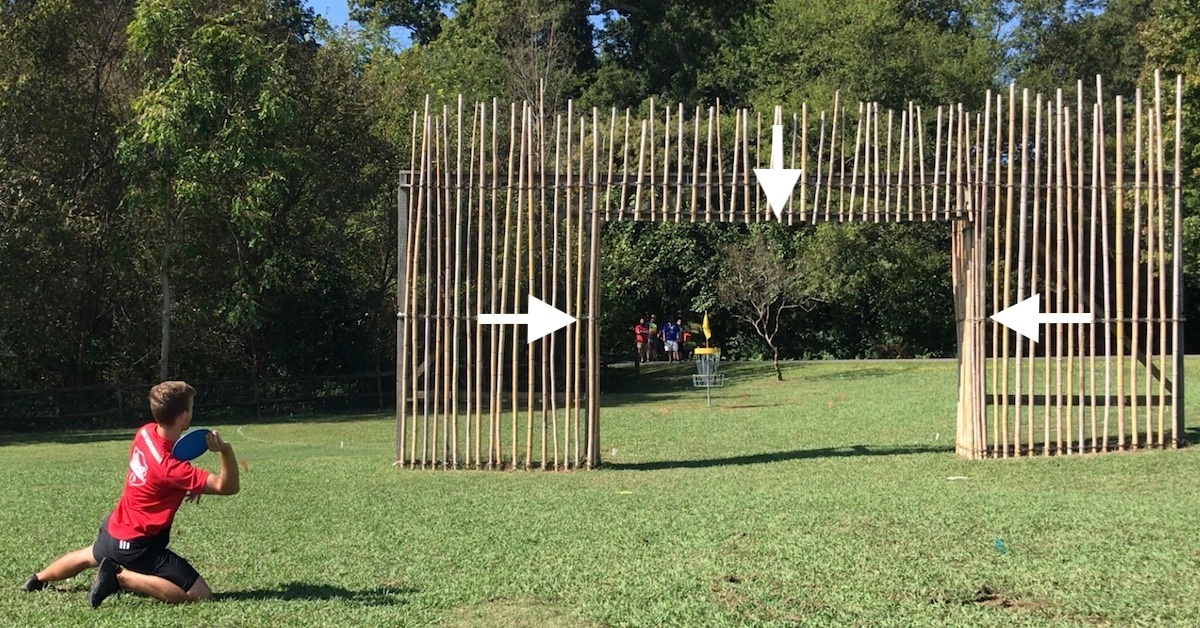 Drop Zone (Drop/DZ):  A lie, designated by the TD, from which the player must throw after having missed a mando or gone out-of-bounds in certain circumstances.

Ten metre circle: The circle around a basket that indicates how a player may putt.

If the circle is not painted or otherwise marked on the course, it is up to group consensus as to whether a disc is closer than 10 metres. So, if a card mate asks, “do you think I am in the circle?”, they are asking for your opinion on whether they are within 10 metres of the basket.

Penalty stroke: An additional stroke added to the scorecard due to a foot fault, missed mando, landing OB or other rule violation.

Relief:  This is when you place your marker further back, in the nearest ‘safe’ spot, in a direct line of play to the basket from where your disc landed.

A player may obtain relief from the following obstacles that are on or behind the lie: motor vehicles, harmful insects, or animals, harmful vegetation, people, or any item or area as designated by the TD.  Relief may also be requested from the playing group when you believe it is not possible to stand on the lie.  This does not incur a penalty however if you take relief when there is no need to do so when it is not allowed, you will receive a one-throw penalty.

Additionally, you may elect at any time to take optional relief by declaring your intention to the group. The lie may then be relocated by marking a new lie which is farther from the target and is on the line of play. One penalty throw is added to the player’s score.

No penalty throw is added if optional relief is being taken following a penalty taken for a disc out-of-bounds or above two metres.

Provisional:  An extra throw that is used when the question of whether or not the disc is OB is unclear, to save time and potentially strokes, a player must call a provisional before throwing, the player then plays from two different lies (provisional and OB), the player’s score is resultant from the correct lie as determined later by the tournament director

Casual water:  Usually non-permanent water on a course that will not result in a penalty.  The TD will usually announce during the meeting that relief may be taken if your disc lands in casual water.

Mini (Marker):  A miniature disc designed to mark a lie.  During tournament play, you have the choice of using the back of the disc where it landed or marking the front of that disc and picking it up.  Your lie must be marked – either by the previous disc or by using a marker.

Foot Fault: One would think a foot fault is easy to explain but this is not always the case.  The important rule to know is that your leading foot (foot closest to the target) must be supported on the tee pad or lie within a 30cm x 20cm rectangle behind your marker when you release your disc. 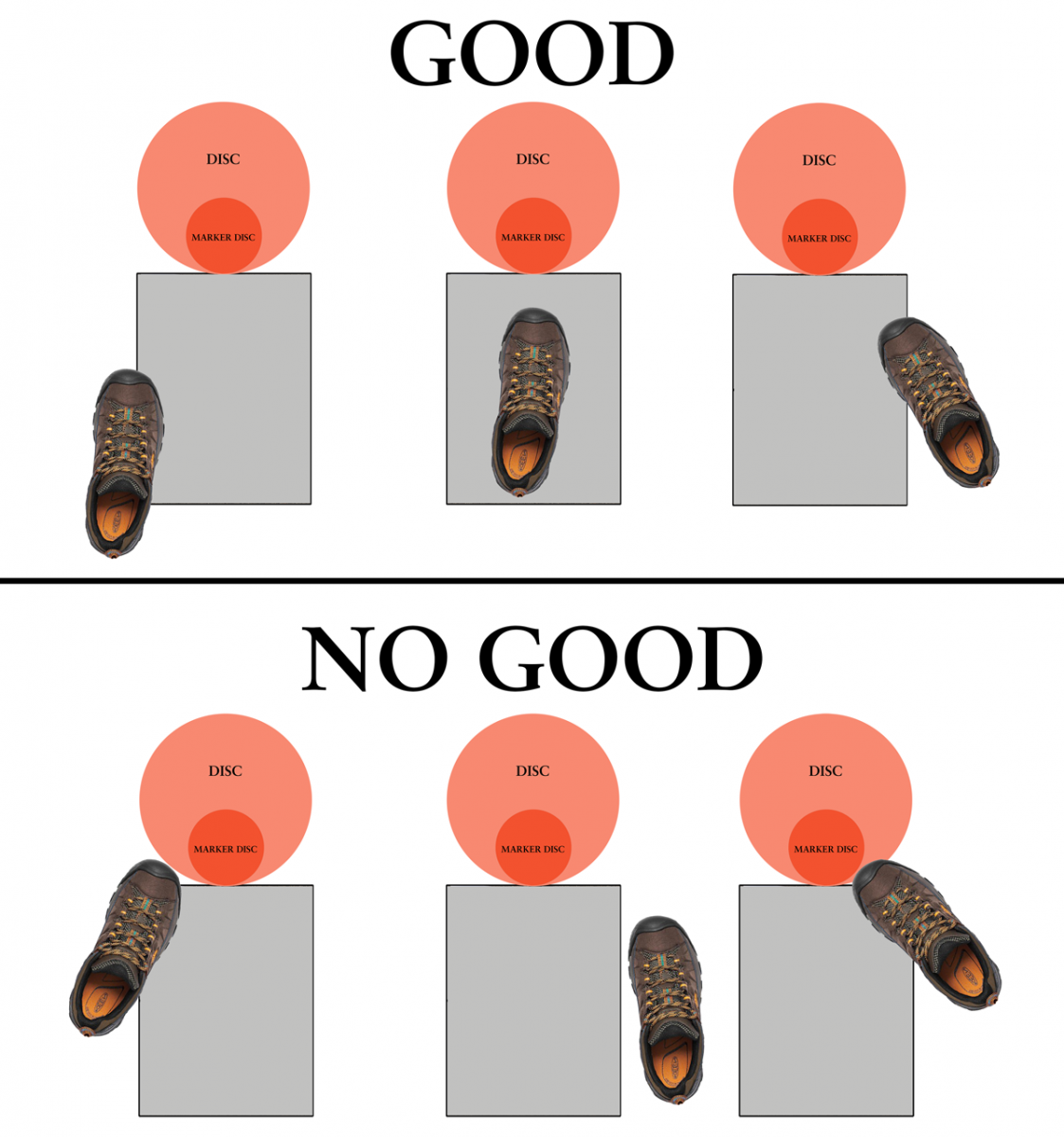 For a run down on all other foot fault rulings, check out this very thorough blog post on the UDisc site;

Three minute rule:  During a tournament, a three minute rule may be imposed for lost discs.  If you lose a disc during play, you have three minutes from the time you start searching to find that disc – once you start searching, all card-mates are expected to be actively involved.   If you do not find your disc within the three minutes, your disc is declared lost and you will receive one penalty throw. The next throw is made from the previous lie. If a drop zone has been designated for lost discs on the hole, the player may throw from the drop zone instead of from the previous lie. Of course, you can return to search for you disc after play is complete.

Thirty Second Rule:  Once you step up to the tee pad or your lie, you have 30 seconds to take your throw.  Simple.

Fore:  If you are on the course and you hear someone yell “FORE”, take cover!  This is the term we use when we have a ‘bad’ throw which unintentionally travels into an area where it may cause harm to others.

CTP: (Closest to the Pin).  During some tournaments, there may be awards for the person whose disc lands closest to the pin (basket) on a particular hole from the first throw.  CTP holes are commonly different for players from different divisions so make sure you know which is your CTP hole before you play.  Markers and measuring tapes are usually provided near the basket to record CTPs.

Spotter:   A role of a player during a round to stand ahead of the thrower to ensure the way ahead is clear and safe or to get a good view of where the disc goes.

Regardless of whether this is your first tournament or you are a seasoned competitor,  the goal is for all to have an enjoyable experience.   If you are not sure of a  ruling, don’t be afraid to ask others on your card or the TD.

Visit the PDGA web site for a full list of  official disc golf rules.  We don’t expect new players to be an expert when it comes to knowing the rules, but it does help to have a basic understanding.

Here are the PDGA Courtesy guidelines, designed to keep everyone happy and safe during play.  Local courses may have additional rules including no smoking, dress codes and mask wearing so please check with the TD if you are unsure about anything.

A player must not: